Now that we’ve wrapped up our unit on industrialization, it’s time we transition into a unit that is inexorably linked to industrialization – IMPERIALISM.  As western countries are amassing greater militaries through industrial production and amassing greater wealth through the capitalist entrepreneurship, they will begin to exert their influences abroad.  We will begin to take a look at how western nations (here, Great Britain and the U.S.) laid claims in China.  We will begin with some secondary source questions (textbook pgs 370-375), and then analyze one political cartoon from the era: 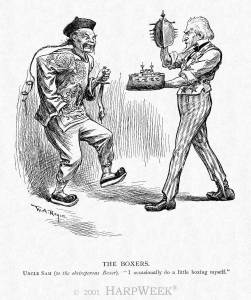