An Inquiry Into the Nature, Reasoning and Scale of Story-Telling, HISTORY & Historiography

Welcome to AP World History with Mr. Cameron! After introducing some basic course logistics like the syllabus and course website, we’re going straight into engaging some historical reasoning skills & disciplinary practices that will stick with us throughout our semester.

Day 1 – Tuesday:  One piece of methodology inherent in this course relates to how we conceptualize the THEMES of history.  Let’s spend a bit more time with the THEMES of AP World History by Categorizing the SECSE themes!!

Day 2 – Wednesday: Analyzing historical evidence: Why Study History – Historical Reasoning Activity (and the PPT…).  Also: QUIZ: How Good Are You At Detecting Bias?  Mr. Cameron looks forward to spending more time with primary and secondary source analysis; more on that next week.

Day 3 – Thursday: The historical reasoning skill of contextualization.  In an effort to help us understand the chronological RANGE of APWH, we need to consider the timeline of human events leading up to the point where AP College Board wants us to begin our curriculum with Big History, the Cosmic Calendar and our APWH Focus using the BIG HISTORY TIMELINE.  Where do humans fit in within the broad context of life on earth?? … within the broader context of our universe?

Day 4 – Friday!  Historical reasoning skills are handy even while addressing a subject that many of us take for granted: what does earth look like?  But let’s problematize the whole concept of geography and cartography, shall we??  See: Geography & Cartography as Historiography. Let’s recall the major physical and topographical features of our lovely planet; then we may begin with an inquiry into a discussion of CARTOGRAPHY and METHODOLOGY as tools of historiography.

Looking Ahead to Next Week:

Throughout the course we will organize ourselves into groups to tackle the many regions of the World addressed in this class.  At the beginning of each Unit, students will organize themselves into “Regionally-Specific” groups.  Click your class period to sign-up: PERIOD 1 … PERIOD 3 … PERIOD 4.  The work your regionally-specific group will complete for each Unit is outlined here in this Regionally-Specific Group Presentation SKELETON, and graded using this RUBRIC.  Here is the Encyclopedia of World history, the document you will use to select your two regionally-specific primary sources that you might address in your group presentation.  Finally, students will be expected to outline a textbook chapter to provide further substance to their coursework and group presentations; here are some ideas on how to organize your notes you take from the Bentley textbook.

Transitioning between the Modern and Contemporary eras requires us to inquire into the transformation in the way humans understand our own history, as well as the relationship between history and science.  Certainly, the 20th century saw wildly rapid and complex technological advancements – how did those advancements change the way we understand the past?  This historiographical question introduces the first Key Concept of the Contemporary Era – Science and the Environment – as it inquires into the rapid advances in science and technology that altered the understanding of the universe and the natural world and led to advances in communication, transportation, industry, agriculture, and medicine.

To introduce this Key Concept over Winter Break, students are to read David Christian‘s 2009 publication of “History and Science After the Chronometric Revolution” (pages 441-456 of embedded source), and respond to the following in preparation for a Socratic Seminar upon our return to school:

Watch this here Crash Course video on “How the Industrial Age Changed Our Perspective” to clarify some of the ideas presented in David Christian’s essay, as it emphasizes important characteristics of the later Modern Era as a way to understand the development of the second chronometric revolution.

Watch this here PBS Eons video “The Missing Link That Wasn’t” to illustrate some of the ideas presented in David Christian’s essay, regarding how our understanding of the process of evolution has improved over time.

Watch this here video from The Economist from summer of 2020 on how Covid-19 has the potential to reshape the idea of what it means to “go to work”.

Browse these Alternative Periodic Tables to reemphasize how there are a LOT of ways to conceptualize our complex world.  You’ll notice that the general theme of all of this work centers on classification and organization.  Keep that in mind moving forward.

Notice how this work, to an extent, returns to where we began class in Week 1.  Open this here Week 1 link in a new tab.  Take out/start a fresh page of paper.  Scroll through that post from the beginning of the semester, and respond to the following:

Thank you for volunteering to take an AP class!  Enjoy it.  Please single-space your work or neatly write it by hand.  Plan a study/work date with friends.  Learning is a social activity, and more fun with others.  Mr. C suggests students individually work through the reading and the bullet-point/SAQ-style prompts seen above the “Railroads” Crash Course video and then get together in a group to tackle the DBQ-style prompt seen below the Crash Course video.  And no, that doesn’t mean a group can submit a ‘group copy’ of work – everyone is responsible for their own work – this is all merely a suggestion of how to most effectively complete the work.

While the Cold War ‘lasted from’ the end of WWII thru the early 1990’s, there are many contemporary issues related to the conflict between the Russian Federation and the United States of America.  In June of 2017, a classified National Security Administration document was leaked showcasing the mechanical logistics of HOW the Russian government was able to interfere in the 2016 U.S. General Elections.  Later that week, former FBI Director James Comey testified before the Select Senate Intelligence Committee regarding this issue and how President Trump might have obstructed justice into the U.S. government’s inquiry into Russian interference into the election.  Apparently we’re living in the THAW of the Cold War…

To spend a bit of time highlighting the geographic realities of the breakup of the Soviet Union, it’s critical that we revisit what we know about the two competing economic alliances during the Cold War: the capitalist North Atlantic Treaty Organization (NATO), the Soviet Council for Mutual Economic Assistance (COMECON) (and the broader Warsaw Pact), and the IRON CURTAIN separating these two superpowers.   Here is a map of the early division of the capitalist versus communist alliances: 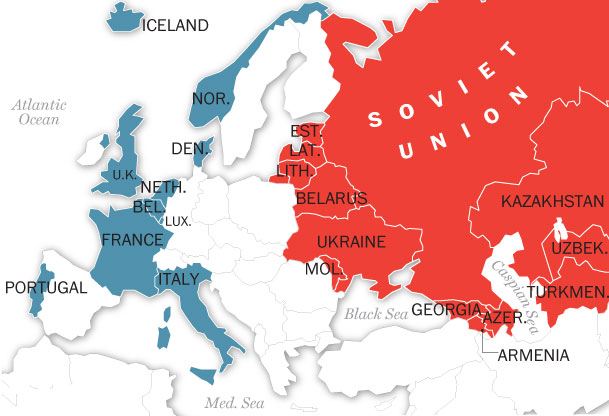 As the Cold War raged on from the 1950’s thru the late 1980’s, the economic alliances expanded and contracted.  The early 60’s were pretty tense:

Ultimately, this tense alliance system became a bit more complex, below, by 1990: 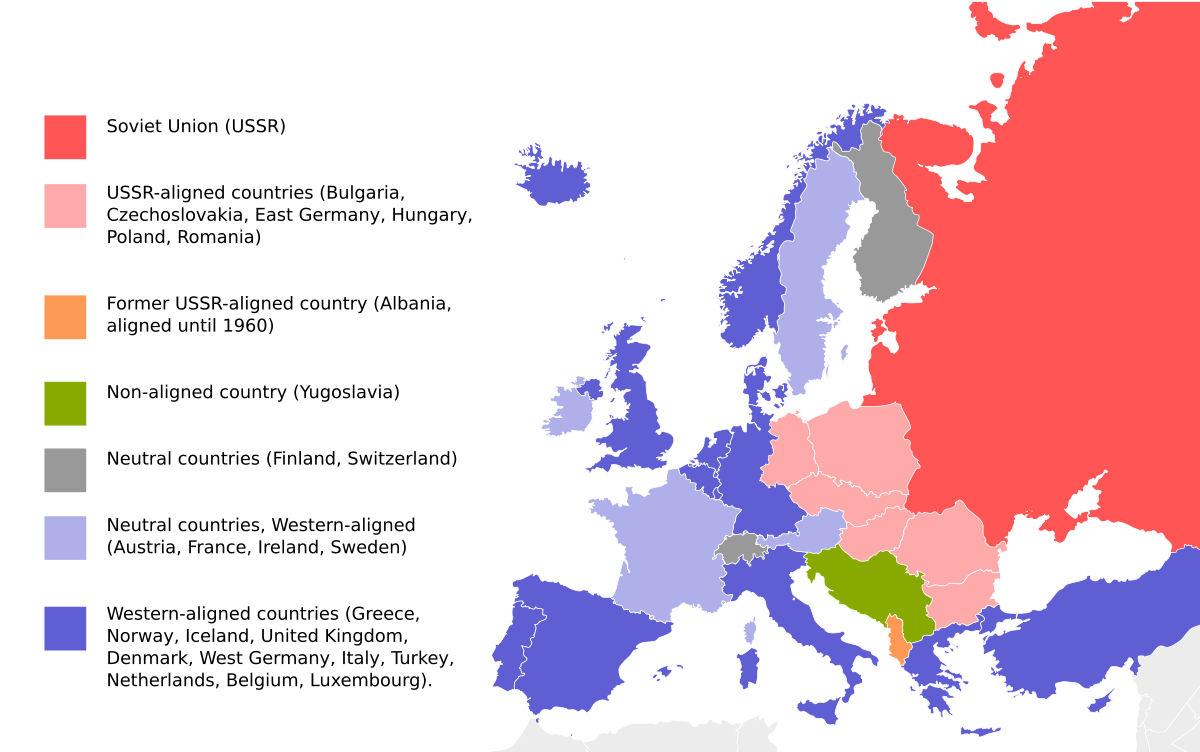 If you’re really interested in the causes of the dissolution/breakup of the Soviet Union, take AP Comparative Government and Politics with Mr. Cameron; we’re just focused on the geographic reality of what territory the USSR (now the Russian Federation, aka Russia) lost as a result of what current Russian President Vladimir Putin described as “the greatest geopolitical catastrophe of the (20th) century.” 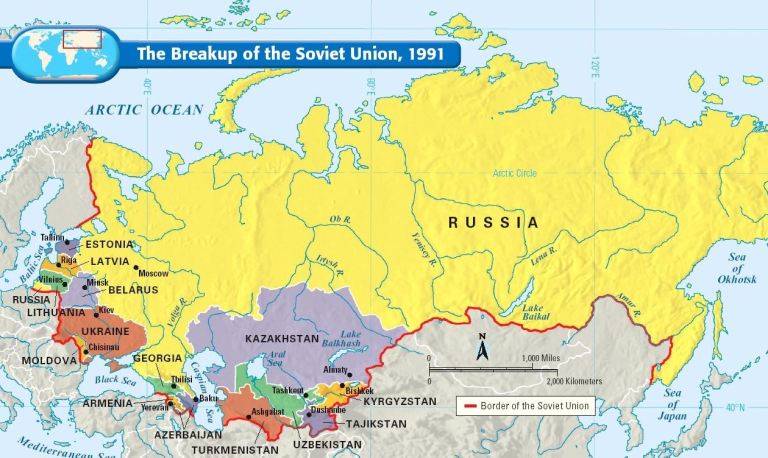 Since the collapse of the USSR, NATO has seen an expansion of its member countries: 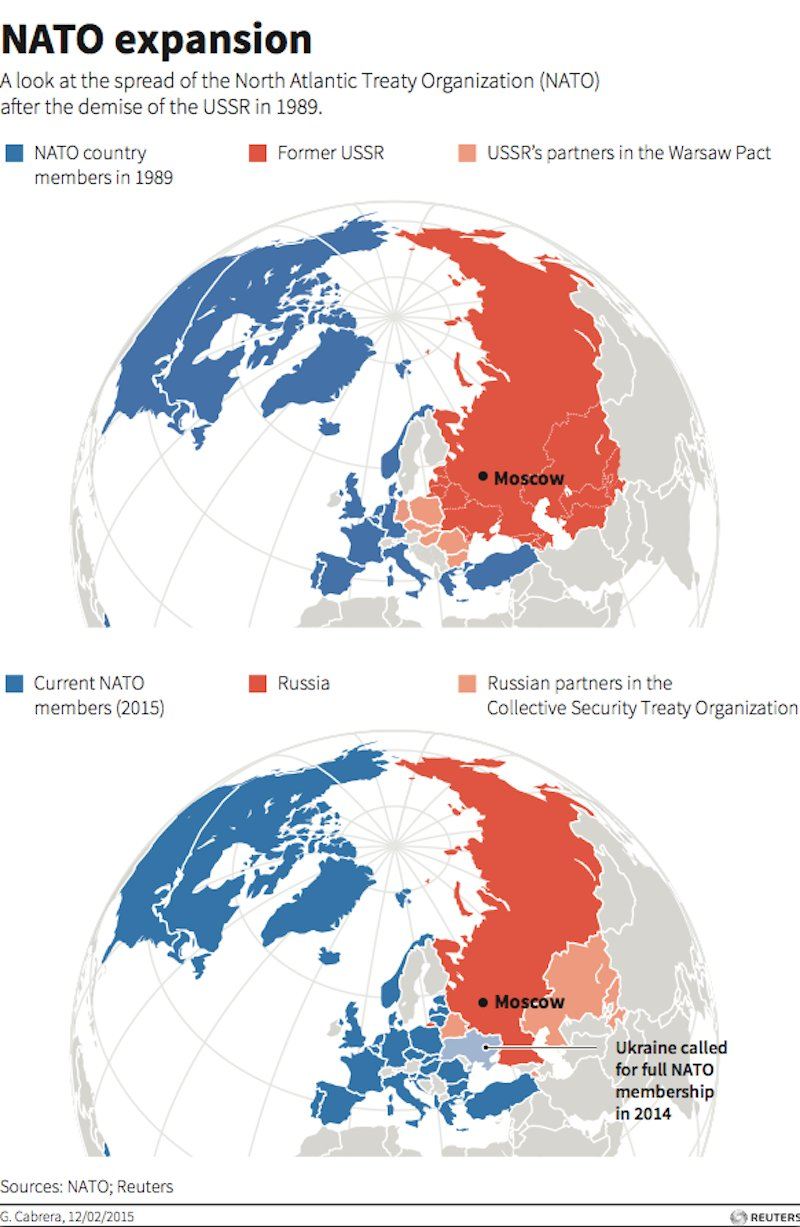 Much of the Cold War seemed to be a sort of Public Relations campaign to shape public opinion – vilifying one side while glorifying the other.  How did people in the USA and USSR perceive these topics?  How might we describe the perceptions  held by the authors of the documents in “The Early Cold War” DBQ? 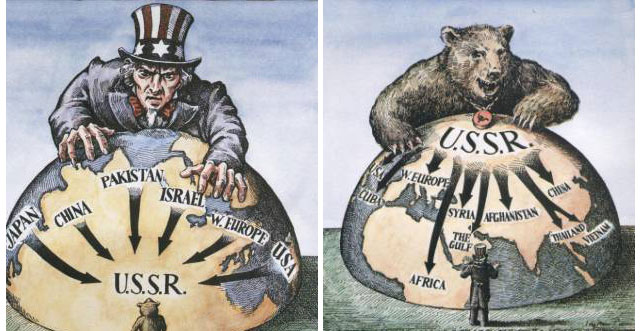 Using the above maps, complete this here Breakup of the Soviet Union and the Thaw of the Cold War worksheet.  If you’re interested in how some of the struggles to reassert the dominance of the Soviet Bloc under the leadership of President Vladimir Putin, take a look at some recent events involving the arrests of people your age.  Read Human Rights Watch’s, “Russia: Children, Students Targeted after Protests: Protesters, Parents Face Intimidation, Charges”.

Finally, to consider the 21st century we live in and how drastically different our world is from the world of only 100 years ago, let’s take a short read through the late Oliver Sack’s (2019) comment/op-ed in the New Yorker Magazine titled, “The Machine Stops.”

Using information from Sack’s article and the video below, evaluate the extent to which disciplines outside of the social sciences inform our understanding of history:

With our final essay on The Early Cold War (DBQ), we’re going to hear a lot about two socioeconomic systems in hot competition with one another after WWII – communism and capitalism.  Before we jump into the DBQ, we should really spend some time differentiating between these socioeconomic systems.  Mr. Cameron began with a short lecture on The 3 Big Socioeconomic Systems, and then we set off to work on identifying which 3 systems are being described using this here: Capitalism? Socialism? Communism?.  John Green’s Crash Course gives a great overview of these competing socioeconomic systems, so take a gander tonight for homework.

Using the evidence from this video, evaluate the extent to which NFL players in the late 1980’s acted as an extension of the labor movement of the early 20th century.

Let’s start class with a group conversation on yesterday’s essential question based on the groups we formed yesterday, seen in this here Atomic Bomb Group Pairing.  Our goal is to not necessarily argue our point, but rather to hear and understand as many perspectives as possible, and explain why the author has the stance they do. Afterward, we’re getting into how decisions made decades ago can impact our current events and relationships.

Students will read this awesome article highlighting how U.S. presidents to this day deal with the aftermath of the decision made by President Harry Truman in August of 1945: “In Obama’s Visit to Hiroshima, a Complex Calculus of Asian Politics”. Respond to the following questions in this here graphic organizer: The Atomic Age after WWII! Finally, watch John Oliver’s video on the incredibly precarious situation America’s nuclear arsenal is in.  Write a short paragraph reflecting on the totality of this information.  What does it mean to live in the Nuclear/Atomic Age? What BIG IDEA has all of this information left you to consider about the world we live in an age of massive stockpiles of nuclear weapons (see: NUKEMAP) and the remnants of military fallout (see: Propublica’s Bombs in Your Backyard).

And just for some historiographic cultural inquiryyy, check out this internet sensation from 2003:

By Friday at the end of class, students will submit the following (in order).  Each assignment is worth 10 points.

We’re beginning our inquiry into the endgame of WWII and the decision to drop the atomic bomb on Hiroshima and Nagasaki in August of 1945.  Our essential question is complex in it’s simplicity: was the U.S. government justified in dropping the atomic bombs on Hiroshima and Nagasaki, Japan? We will use the following documents to help us answer that question, and this worksheet – WWII Endgame and Fallout– to organize our ideas, and then break into groupsdepending on the stances students take on the question.

Welcome back! Let’s continue our work with our focus of study: imperial powers exerting their influence during the Age of Anxiety.

Imperial powers are extending into new territories – this is not just a phenomena of European nations, so too are imperial nations in Asia responsible for the same sort of aggressive territorial expansion. Today, we will examine the Japanese invasion of Manchuria, China.  We will organize our work using Imperialism in Asia during the Age of Anxiety.