Recognizing the rise of fascism throughout Europe and the ascent of Adolf Hitler fueled by his motives of re-gaining “living space” (Lebensraum) for Germany, we  have to consider the question of HOW Adolf Hitler actualized this goal.  We’ll return to “Hitler’s Lightning War” (Blitzkrieg!!) and the dissolution of the Russo-Soviet Non-Aggression Pact of 1939.

Let’s focus on war propaganda!  Use this easy Political Propaganda Sheet to respond to the questions on the sheet for each of the following pieces of propaganda: 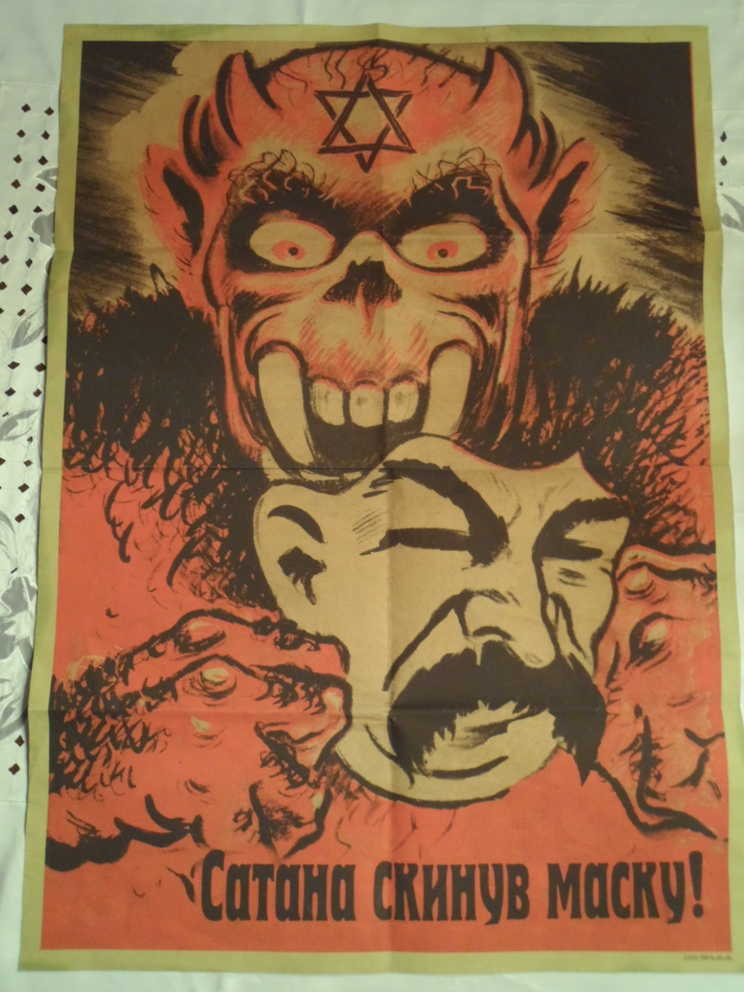 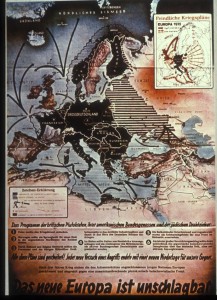 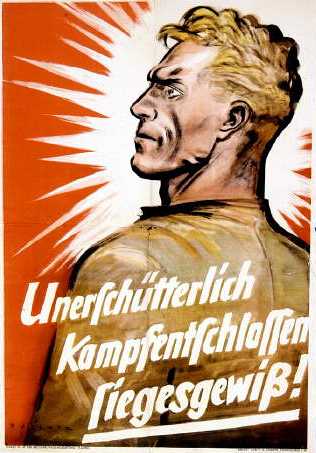 To apply this understanding of how people can be very effective in their goals of persuading people to think a certain way or act a certain way, we’ll look at a few short excerpts from world leaders during our period of study, WWII, using this here Applying Persuasive Argument Techniques to Key International Leaders During WWIIworksheet.

Welcome back! After Mr. Cameron handed back the essay concerning the inevitability of WWII in the Age of Anxiety, it’s time to take what we know about the this tense inter-war period to transition into The Rise of Fascism in Europe.  Students will follow along the lecture with this here lecture guide. Students will then move onto completing Hitler’s Lightning War using pages 491-496 of their textbook.

To inquire into a variety of perspectives regarding Hilter’s Blitzkrieg and the decision of the United States to either engage in WWII or maintain neutrality, we’re spending some time analyzing some political cartoons with this here WWII Political Cartoon Analysis. Before we dig into the political cartoons, we need to spend a bit of time identifying some key historical developments.

… even Spongebob memes get in on the action! Note that Japan was the aggressor in Pearl Harbor – that’s not entirely clear in this meme, but it nonetheless emphasizes how the U.S. maintained neutrality in WWII until they were attacked.

Now that we’ve wrapped up our look at the causes and consequences of WWI, it’s time we began to think about the continuity of the historical narrative between WWI and WWII, a period known as the Age of Anxiety, and will prime us to answer our overarching essential question from the last two weeks:

Students will be introduced to a selection of 12 primary source documents in this Age of Anxiety DBQ.  Our focus early in the week will be on understanding the question we’re being asked in the DBQ, and how we might go about categorizing the documents into categories designated by the prompt.  Notice how we’re being asked to analyze the political, cultural, and economic conditions that culminated in the development of WWII.  How might we understand each document into either of these three categories? Let’s spend some time working to categorize the documents using this handy DBQ graphic organizer that will help students craft a strong THESIS STATEMENT and appropriate TOPIC SENTENCES to control the ideas of each body paragraph.  Let’s also consider appropriate use of documents with this here “Strengths and Weaknesses of DBQ Writing.”

One SECSE theme of the class not addressed in the 12 documents is how environmental factors could very well be contributing to this Age of Anxiety.  Watch this Ted-Ed video on How Pandemics Spread, paying particular attention to the Great Influenza sweeping across the globe at the end of WWI. Talk about anxiety-provoking!

Ultimately, students will be turned onto the DBQ RUBRIC that will be used to score their essays. Students are allowed to work in partners for the Age of Anxiety DBQ, which is DUE in final draft form on Monday, June 10.  Share your essays HERE.

This week we’re spending some time with the ways in which people around the world reacted to the Treaty of Versailles and the possibility of joining U.S. President Woodrow Wilson’s proposed “League of Nations.”  We know the U.S. chose to isolate themselves from the post-WWI conflict by NOT joining the League of Nations despite the fact that this supranational organization was conceived by the U.S. President.  To help us unpack our overarching essential question, today we will focus on the two supporting questions of:

How did the world view the Treaty of Versailles?

To unpack this question that we began to focus on yesterday, students will take a look at these four political cartoons seen in this here International Reactions to the Treaty of Versailles. While the Treaty of Versailles established the conditions for post-WWI peace, further efforts to unify world powers into a League of Nations were met with a variety of opinions.  This leads into our next supporting question of…

How did American’s view their involvement with the League of Nations?

As we move toward understanding the long-term effects of WWI, Mr. Cameron will lecture on some of the Outcomes of WWI and introduce the Treaty of Versailles. Recognizing the fragility of the world after WWI, our overarching essential question for this unit is:

We will then begin to dig into some primary sources related to the end of WWI. Today, we will focus on two supporting/sub-essential questions:

What did U.S. President Woodrow Wilson mean by ‘peace without victory’?

Students must consider what Wilson intended the Treaty of Versailles to accomplish. Students should think about the conditions Wilson established and his reasons for these specific guidelines. Primary source documents that will inform this supporting question include:

The next supporting question we will focus on is:

What did Germany lose by signing the Treaty of Versailles?

Primary and secondary source documents that will inform this supporting question include:

Did the Treaty of Versailles of 1919 set the stage for World War II?

To inform this inquiry, we’re looking at two primary source documents from the period:

Students will reflect on the content of our primary sources and today’s supporting question using An Inquiry Into the Outcomes of WWI.

Continuing with our inquiry into WWI, let’s reinforce the idea of the importance of ALLIANCES as a key reason for the outbreak of WWI with this here Causes of World War I Simulation.  To keep track of the burgeoning alliances…

It is critically important that students consider some of the contextual issues we’ve covered thus far in class that might influence which country allies with whom – consult your “Languages Fuel Nationalism” work, as well as the map of pre-WWI Europe!! Students will respond to the questions on the backside of the “Causes of WWI simulation sheet,” seen HERE.

After students submit their “African Responses to the European Scramble for Africa” essays, we’ll transition from imperial ambitions to how these ambitions will cause global conflict with an introduction to the 4 MAIN causes of WWI; students will use this here lecture guide: Tensions and Conflicts Leading to WWI to organize their ideas.

Mr. Cameron will introduce the topic of ALLIANCES, and what will lead to the military alliances of WWI.  Let’s consider this map of Europe in 1900 to inform how a variety of European states would ally themselves.  Before the lecture, students will complete Languages Fuel Nationalism. 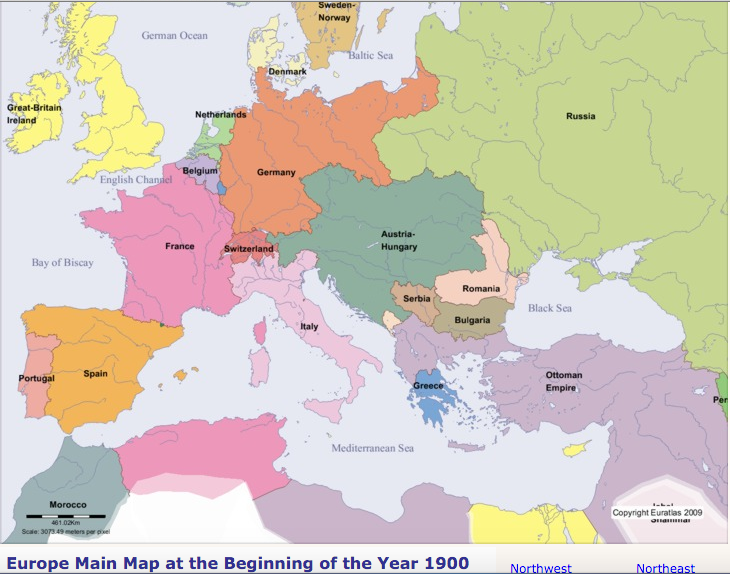 Now that these alliances are entrenched, and each country is ready to back up his ally with industrial military might. What might be the SPARK to ignite this powder keg? Let’s check out this perspective.

To continue to inquire into the scope and extent of imperialism on the eve of the 20th century, we will focus on Imperialism in India.  This work will be clarified Monday and DUE TUESDAY.

Later this week we will round out our look at the regions affected by imperialism. Mr. Cameron will introduce key vocabulary and significant events w’ his lecture on Imperialism in Africa, and we will inquire into a document based question (DBQ) on African actions and reactions to European imperialism, noting a few maps in your textbook and responding to questions in Expanding the Scope of Imperialism.

Partner essay on the scramble for Africa is DUE Monday, May 20.

Here is the Essay/DBQ RUBRIC.  Share your essays with Mr. C. HERE

Now that we’ve seen imperialism in Asia and Latin America, let’s continue to CONTEXTUALIZE the full extent and scope of imperialist ambitions.

Due at the end of class:

We’ve seen imperialism through the eyes of the Boxers in China in 1900/01 and the competing interests of the U.S. government, but we haven’t yet much about how imperialism was justified by the conquering countries.

Today, we will inquire into how imperialism was justified.  Mr. Cameron will begin with a short lecture on Justifications for Imperialism while students use this here lecture guide to organize their ideas. Essential Question: Recognizing the variety of motives for imperialism, which motive most closely fits with the ideas offered in Rudyard’ Kipling’s “The White Man’s Burden”?  Explain Edward Morel’s response to Kipling.