Technological and Environmental Transformations to c. 600 B.C.E.: the Transition from the Paleolithic to Neolithic Era, and the Formation of Early Complex Societies

Transitioning from Big History, as inquired into by PBS’ Eons YouTube page, we can then adjust our historical time scale from the geologic to the human scale.  Even though it’s not a major focus of the AP College Board’s curriculum, Mr. Cameron is fascinated by the evolution of humans.  Recognizing the importance of the cognitive revolution and collective learning, how did homo sapiens out-compete the other six humanoid species that existed over 100,000 years ago?  One answer might lie in our ability to run; read Christopher McDougall’s: The Humanity of Running.  To problematize the cooperative efforts innate in collective learning, we can read this account of a historian chronicling a constant tool of division among people of earth – Robert Sapolsky: How Your Brain Hates Other People, and How to Make It Think Differently.

Foundations KC 1: Big Geography and the Peopling of the Earth. Throughout the Paleolithic era, humans developed sophisticated technologies and adapted to different geographical environments as they migrated from Africa to Eurasia, Australasia, and the Americas.

Growing archaeological evidence suggests some mixing of different bi-pedal species in the early paleolithic period.  An NPR article from 2013 investigated a new discovery of inter-species breeding; the article was followed-up in 2018 with the (SECSEE?) title of Ancient Bone Reveals Surprising Sex Lives Of Neanderthals. 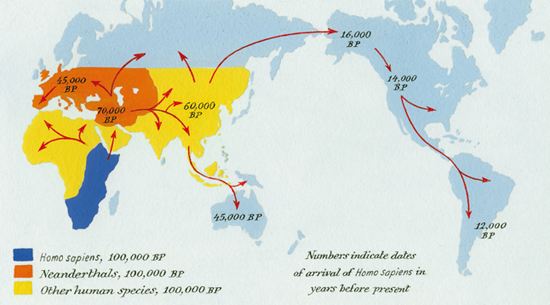 Foundations KC 2: The Neolithic Revolution and Early Agricultural Societies.  Beginning about 10,000 years ago, some human communities adopted sedentism and agriculture, while others pursued hunter-forager/gatherer or pastoralist lifestyles — different pathways that had significant social and demographic ramifications.

The topic of the the scope of ‘early’ agricultural settlement has recently undergone radical change.  New data in aerial mapping, tectonic seismology, and a host of complex fields of archaeology are being combined to lend extensive evidence to support a completely different story to understand the natural environment and subsequent peopling of the Saharan region of Africa.  Challenges to the narrative of the Saharan region are not new.  Watch and Read the following: Atlas Pro’s “How Geography Turned the Sahara Green“, Bright Insight’s “You Won’t Believe What’s Buried Under the Sahara…“, and PBS Eon’s “When the Sahara Was Green“.

Foundations KC 3: The Development and Interaction of Early Agricultural, Pastoral and Urban Societies.  The appearance of the first urban societies 5,000 years ago laid the foundations for the development of complex civilizations; these civilizations shared several significant social, political, and economic characteristics.

Concerning commonalities between ancient civilizations, consider this Reading on Creation Stories and the Reading on Flood Stories; and to focus specifically on China and Egypt, see this Document Based Question (DBQ) on Similarities and Differences in Foundational Religious Beliefs and Practices in Egypt and China.

Crash Course conceptualizes and problematizes the idea of CIVILIZATION:

Check out Freeman-pedia’s page on the Paleo->Neolithic age and development of early complex societies. 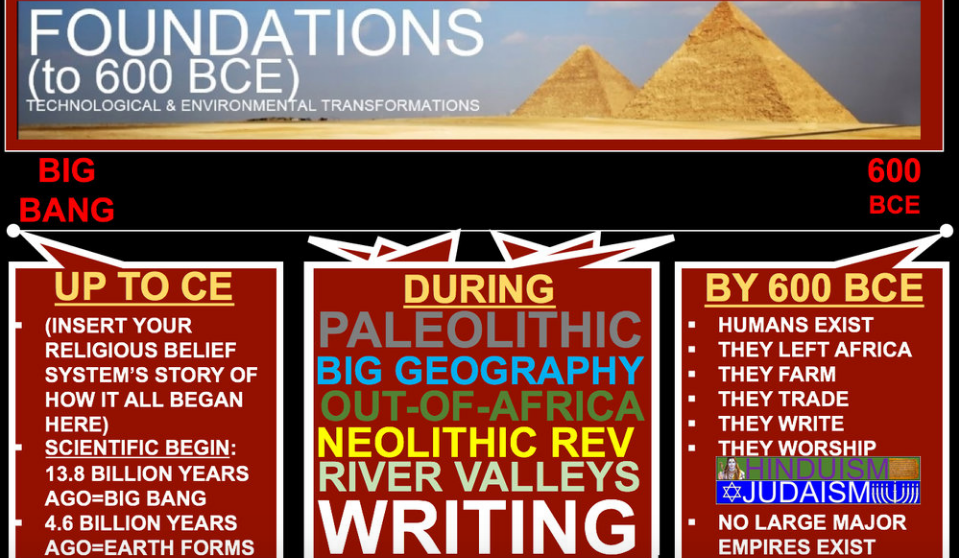 1) Why do you want to take AP world? What do you hope to learn?

Just as we do with our unit-by-unit SECSE Maps (on the “Geography!” page of the website), it will be important that we annotate and color-code our chapter notes by key concept.  Here you’ll also find the lectures for each chapter; again, students should take the time to apply these notes to specific key concepts seen in the Key Concept HW Packet.